Scientific publication in the journal Nature reinforces the important role of Nova Gorica University in the field of organic electronics. 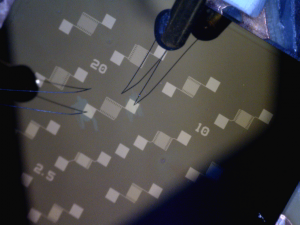 The researchers of Laboratory for Organic Matter Physics, University of Nova Gorica dr. Egon Pavlica and prof. dr. Gvido Bratina, together with colleagues from the University of Strasbourg, France, Humboldt University in Berlin, Germany and Stanford University, USA, have published an article in a prominent scientific journal Nature Chemistry on the June 24th. In the published work, they have presented the principle of operation and fabrication of a bi-stable photo-activated switch, which is based on a blend of two different organic semiconductor materials (Nature Chemistry, doi: 10.1038/nchem.1384). The discovery joins together the functionality of electric charge transport and the sensitivity to light into a single active layer, reducing the size and the complexity of a photo-modulated switch. The researches in the published work have prepared the blend of two different organic semiconductors: a derivative of the diarylethene molecule and a polyhexylthiophene polymer. Such blends exhibit bi-stable nature of electrical conductivity, which can be modulated with the light illumination. The conductivity can be switched from non-conducting to conducting state, when the blend layer is illuminated with the light of specific wavelength. When the blend is illuminated with the light of different wavelength, the conductivity switches from conductive to non-conductive state. In order to prove the principle of operation, a photo-switchable organic thin-film transistor was fabricated. The device photoresponse was found to be in the microsecond range, and thus on a technologically relevant timescale. This modular blending approach allows for the convenient incorporation of various molecular components, which opens up perspectives on multifunctional devices and logic circuits.

This entry was posted in Research. Bookmark the permalink.